Due to heightened concern over the COVID-19 virus, Pace Performance has taken a proactive approach to slow the spread of this virus. We are operating on a skeleton crew in the warehouse but have started shipping orders again. Orders will be processed as soon as possible. Thank you for your understanding. 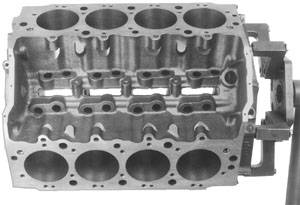 This Bow Tie bare block has all 8620 steel main caps and all are CNC machined with a standard 9.80" deck. This Gen VI CNC machined race prepared block features blind head and accessory mounting bolt holes, a deck configuration that enables the use of any big-block Chevy cylinder head, and cylinder bores that may be safely bored to 4.600" diameter while maintaining a cylinder wall thickness of .250". In addition, the new casting design improves engine block life and build ability of the previous generation of Mark IV big-block Chevrolet blocks. CNC machined race prepared Bow Tie blocks differ from the production machined Bow Tie versions in certain areas. CNC race prepared blocks start from raw castings and are not "conversions" and use a rear seal adapter to convert the Gen V/VI one-piece rear main seal to a Mark IV type two-piece seal that facilitates the use of a widely available Mark IV style crankshaft. In addition, 8620 steel bearing caps are put in all locations to further increase the integrity of the bottom end. The intermediate caps also feature 16 splayed outer bolts which anchor the caps into the strongest section of the block and prevent bearing cap movement under high loads. Bow tie race prepared, as well as production Gen V/VI blocks use priority main style oiling, in which the oil flows from the main gallery near the cam, oiling the cam via a small hole, and directly to the main journals. The main oil gallery on these blocks is relocated and enlarged to 9/16" diameter to allow increased oil flow through the block. The oil cooler provisions found on all Gen V/VI production machined blocks is eliminated so plugging of this boss is not required when preparing for a racing style oiling system. CNC race prepared Bow Tie blocks have inner head bolt bosses which allow better retention of cylinder heads in high horsepower applications due to cylinder head "lifting" from the block due to high cylinder pressures. The tall and short deck race prepared blocks weigh 288 and 278 pounds respectively which is at least 12 pounds lighter than imitation Bow Tie aftermarket blocks. Casting# 24502504.

Trusted Specialists GM engine & parts specialists
Located in the USA Owned, operated, & employed
Need Assistance? Call us at 888-748-4655
Mon-Thu 8am-6pm EST
Fri 8am-5:30pm EST
Have a Question Email us and we'll get back to you within 24 hours