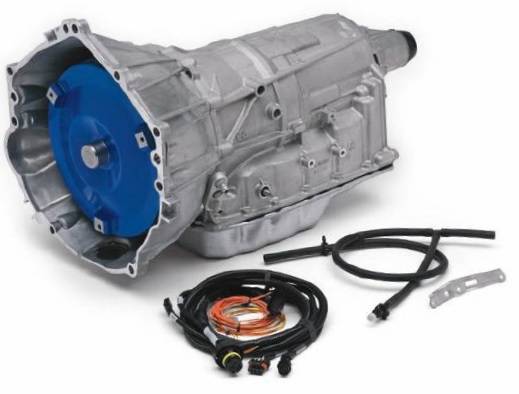 It is based on the same, robust transmission offered in a number of rear-wheel-drive production vehicles, including the Camaro and Chevy trucks, but is enhanced with specific internal components that contribute to a higher output torque rating of 650 lb.-ft.—a 45-percent increase over the regular-production six-speed transmission.

The electro-hydraulically controlled 6L80-E has a modular arrangement that represents a significant departure in the design and operation of other General Motors automatic transmissions such as the 4L60 and 4L80 Series, including clutch-to-clutch shift operation rather than conventional bands.

With the 6L80-E, there are three gearsets: a simple input planetary gearset and two output gearsets, one of which is a compound gearset with three pairs of two pinion gears on the output carrier, one pair meshing with the sun gear and the other with the ring gear. This arrangement allows for optimal ratio steps with a 6.04:1 overall spread.

Gear changes from second to sixth gear ratios are made with clutch-toclutch action, where an “on-coming” clutch is engaged and an “off-going” clutch is released precisely to achieve the ratio change. The firstto- second upshift is a freewheeling action, where the second gear clutch engages while the first gear one-way clutch spins freely.

The unique gearset arrangement and clutch-to-clutch action helps keep the overall length to approximately 23.5 inches, about 1.5 inches longer than a 4L60. The new SuperMatic™ 6L80-E six-speed automatic is the perfect resto-mod complement to an LS crate engine.