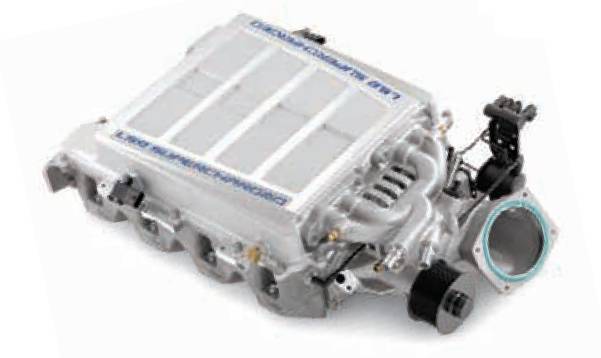 Introduced in the 2009 ZR-1 Corvette, the supercharged 6.2L engine produces 638 hp. Now you have the ability to use the same supercharger package with the front accessory drive and build up your own LS or LSX based supercharged engine. The intake bolt pattern and port configuration is the same for the LS3, LSX-LS3, L92, LSA and LS9 cylinder heads. The GM Performance Parts LS9 Supercharger kit includes the cast cover and intercooler, as well as the supercharger intake system and a gasket kit. It is completely assembled with injectors, front pulley and throttle body. Professional installation is suggested. The supercharger kit may require minor modification and calibration. * Note -- This kit installation is recommended with the LS9 front accessory drive kit. (#19243524)

A supercharger is essentially an air pump driven by the engines crankshaft. It forces more air into the engines combustion chambers than that engine could otherwise draw on its own. The increased volume of oxygen allows the engine to efficiently process more fuel, and thus generate more power.

The TVS takes supercharging technology to new levels of refinement and efficiency. Each of its two rotors has four distinct lobes, or spiral-shaped vanes that intermesh precisely with those on the other rotor as they spin at high speed. Efficiency gains with the four-lobe rotors are substantial, compared to comparably sized, previous-generation superchargers: approximately 20 percent more airflow, with an improvement in thermal efficiency up to 15 percent. Moreover, parasitic power loss—the amount of power the engine uses to operate the supercharger—is reduced 35 percent. That improves both supercharger response time and the engines overall efficiency.

With the LS9, the numbers speak for themselves: 103 horsepower per liter displacement, with substantially higher specific torque than comparably sized engines from Ferrari and Lamborghini. Yet impressive output figures tell only part of the story.

The TVS superchargers large displacement expands its effective range, building power more quickly at low rpm. Its four-lobe rotors spin at up to 15,000 rpm, or slightly more than twice the engines rotation speed, to sustain its benefits at high engine speeds, when many superchargers lose their effectiveness. Theres no high-rev power drop-off in the LS9.

Nor is there typical supercharger whine—the high-pitched, whizzing sound emanating from a supercharged engine as the rotors spin furiously. The four-lobe design helps lower noise radiating from the supercharger case as much as 10 decibels. Sound pressure is nearly identical whether or not the supercharger is generating boost.

The R2300 supercharger case and integrated intercooler have been tailored to the space available in the Corvettes engine bay. Despite its relatively large displacement, the supercharger sits neatly atop the 6.2L LS9 under a slight, see-through bulge in the ZR1s carbon-fiber hood. The air inlet and drive pulley are located at the front of the case, and the LS9s overall height is only slightly taller than the standard Corvette LS3 V-8.

Integrated Dual-Brick Air-to-Liquid Intercooler
An advanced intercooling system increases the 6.2L LS9s performance and extends its superchargers benefits. The engines charge cooler is integrated in the supercharger case just above the rotors, with two air-to-liquid cooling “bricks” that substantially lower the temperature of air used in the combustion process.

Intercoolers are familiar features on supercharged and turbocharged engines. Similar in concept to an engines radiator, intercoolers cool the air pumped by the charging device into the cylinders. Cooler air is denser air, which means more oxygen in a given volume, resulting in optimal combustion and more power. Traditionally, intercoolers look like small radiators mounted somewhere outside the engine, with air fed into the engine through a plumbing network.

The LS9s intercooling system raises the bar in both packaging and efficiency. It uses two low-profile, aluminum tube-and-fin heat exchangers mounted longitudinally above the rotors in the supercharger case. Air pumped by the supercharger flows directly through these bricks to the intake ports on the cylinder heads. The bricks are cooled by their own coolant circuit, with a remote pump and 3.62-liter capacity heat exchanger mounted in front of the Corvettes radiator.

Bottom line: The temperature of air fed to the LS9s cylinder heads is reduced 140 degrees F (60 degrees C), substantially increasing the amount of oxygen available for the combustion process. The intercooler design also contributes to the superchargers quiet operation. The cooling bricks help dampen sound radiating from the supercharger case, while ribs cast into the top of the intercooler housing add strength and reduce vibration.