The 5.3L controller system is specially programmed for retrofit installations, with features that make getting the vehicle running easier than if a production 5.3L controller were used. The kit also includes hardware and components that don't typically come with used engines, such as the wiring harness, mass airflow meter and electronic throttle pedal - eliminating the need to source them separately. The kit includes:

It is a true stand-alone system for use in older vehicles, as all that's needed to get a vehicle running with it are power and ground sources, a 58-psi (400 kPa) fuel pump and an electric cooling fan.

And unlike the calibration for regular-production controllers, Chevrolet Performance's specially calibrated 5.3L controller does not engage the cylinder-deactivating Active Fuel Management system that originally came with the engines. A number of other features associated with production-model systems are turned off with the controller, as well, eliminating the possibility of "trouble codes" being set. It is also programmed for easy use with Chevrolet Performance's automatic transmissions and includes a SES (service engine soon) LED indicator embedded in the fuse box.

The controller is engineered to work with the following 5.3L engine codes, which feature 58X ignition systems: 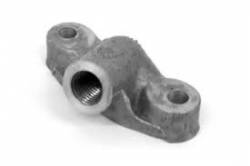